The Proteas have a very short ODI history against the Netherlands, even though it dates back to late 1994.

In all, the two teams have only played against each other four times, three of them in the World Cup, with South Africa unsurprisingly prevailing on each occasion.

But there was one memorable day in The Hague where the men in Orange, in an unofficial match, whalloped their more illustrious opponents.

1994 (UNOFFICIAL) IN THE HAGUE – NETHERLANDS WON BY 9 WICKETS

Demoralised by a poor finish to a long inaugural post-isolation tour to England, the Proteas weren’t particularly thrilled to fulfil this fixture.

While they weren’t expecting to struggle, they could’ve paid more heed to other teams’ previous experiences.

The powerful West Indies suffered a five-wicket defeat in 1991 after being bowled out for 129, while Pakistan scraped to a 7-run win in 1993.

Captained by Hansie Cronje because Kepler Wessels was injured, the South Africans slumped to a patently depressing 134/8 in a match reduced to 40 overs per side by rain.

Floris Jansen’s brilliant new-ball burst reduced the visitors to 32/3 and later 52/6 as he took 3/8.

Then, 45-year-old Barbadian Nolan Clarke smashed the Proteas attack to all parts in a magnificent 78, leaving the South Africans shell-shocked.

Both in cracking form during that year’s World Cup, Andrew Hudson and Gary Kirsten (83) combined for a then record opening stand of 186 to effectively play the Netherlands out of this game.

The former at one stage threatened to break the latter’s SA record of 188* – made in the first match of their campaign against the UAE – before falling for a superb 161 off 132 balls.

Cronje’s crunching 41 applied the finishing touches to an impressive total of 328/3.

Clarke, now 47, enjoyed himself in a 46-ball stay at the crease that delivered 32, but South Africa’s nagging pace attack proved too potent and disciplined as the Netherlands settled to play out time, ending on 168/8. The Proteas’ first match of the 2007 World Cup in the Caribbean started on a damp note as overnight rain and a wet outfield delayed this game to 40 overs.

Former Bolander Billy Stelling gave the underdogs a fine start when he had AB de Villiers caught behind off the second delivery of the match and the first 5 overs actually only produced 4 runs.

But then Graeme Smith went on the attack and South Africa never looked back.

Jacques Kallis was unusually aggressive in striking five sixes in his unbeaten 128 off 109, but it was Herschelle Gibbs that stole the show.

The enigmatic right-hander made World Cup history by becoming the first man in the tournament to hit six sixes in an over, the unfortunate victim being hapless spinner Daan van Bunge.

Ryan ten Doeschate’s 57 was classy, but excellent fielding restricted the Netherlands to 132/9. Another World Cup encounter and another false start.

In difficult early-morning conditions, the Proteas struggled to 58/2 on a two-paced surface before Hashim Amla and De Villiers combined for a typically productive partnership.

The put on 221, a stand notable for both men just playing prudently.

De Villiers eventually needed only 98 balls for his 134 but never really played a shot in anger, attesting to his class, while Amla overcame a stroke-less start to make 113.

Kallis produced a fine spell to dump the Netherlands into trouble before the spin twins of Imran Tahir and Robin Peterson combined for five wickets as they were bowled out for 120. 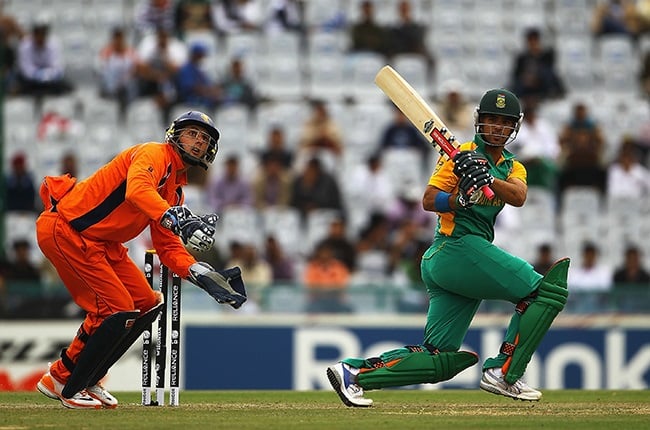 This official ODI was nothing more than a warm-up for the Proteas before that year’s Champions Trophy.

Duminy enjoyed himself to craft his highest score in the format, hitting eight sixes en route to an unbeaten 150 off 122 balls.

A target of 342 was never going to be overhauled, but the hosts made full use of the easy batting conditions.

Eric Szwarczynski, who was born in Vanderbijlpark, compiled a fine 98 before agonisingly being run out as the Netherlands reached a creditable 258/9.

WATCH: ‘A reptile imitated my husband and tried to have sex with me’

News24.com | SARS and other countries shared info on over 75 million accounts in global tax evasion crackdown