Thousands of people could die of COVID-19 in Victoria in the event of a highly infectious outbreak if there were no restrictions on movement and gatherings even if 70 per cent of the population were vaccinated.

These are the findings of new mathematical modelling developed by Melbourne’s Burnet Institute, which suggests Australia is unlikely to ever reach herd immunity against COVID-19 at the current level of vaccine uptake because more highly contagious variants could undermine immunity.

The medical institute’s modelling also suggests public health interventions such as increased testing, home isolation and face masks will be required for several years to come when new COVID-19 cases emerge, even if there is high uptake of the vaccine.

Herd immunity occurs when a large enough proportion of the population is vaccinated against a disease, or has been infected with a disease and developed antibodies against it, preventing the virus from transmitting widely.

The Burnet Institute modelling assumed a vaccine rollout speed of either 150,000 or 250,000 doses a week in Victoria, and examined several scenarios projecting the number of COVID-19 infections, hospitalisation and deaths one year after new infections enter the community.

Modelling for one scenario examined the likely outcomes if a new strain of the virus 1.5 times more infectious than the Wuhan strain, which plunged Victoria into lockdown last year, seeded an outbreak after 80 per cent of Victorians aged over 60, and 70 per cent of the rest of the population, were immunised.

Burnet Institute head of modelling Nick Scott, who led the research, said it found even if a small outbreak of a highly contagious strain of the virus seeped into Melbourne at roughly 60 per cent vaccine coverage, it could result in 4885 deaths within a year.

“Those who are vaccinated would be protected and may only experience mild or no symptoms,” Dr Scott said. “But among those not vaccinated – possibly up to 30 per cent of the community – we could see a large number of hospitalisations and deaths.”

The modelling tool, which can be tweaked to adapt vaccine efficacy around variants, also showed that if the same scenario played out when vaccine coverage increased to 95 per cent, the projected number of deaths would drop to 1346.

If the vaccine’s efficacy against infection increased to 75 per cent, with the same parameters in the scenario described, the number of deaths after one year could be less than 1000.

Without herd immunity, if we … allowed the virus to spread, it is still likely to infect a large proportion of the community.

“What it really shows is without herd immunity, if we stopped taking a public health approach and allowed the virus to spread, it is still likely to infect a large proportion of the community,” Dr Scott said.

Burnet Institute deputy director Margaret Hellard said the modelling depicted a “worst-case scenario”, showing what could happen if governments decided not to intervene and “let the virus run” even with moderate-to-high vaccine coverage.

“This is a scenario that is unlikely to happen because we would intervene,” Professor Hellard said.

“But what this modelling highlights is we need much higher vaccine coverage to reduce infections and severe infection.

“It also tells us that even with really high vaccine coverage, there will be occasions where we do need to bring in some extra levels of restriction, like face masks and increased testing, but probably not as harsh as the lockdown we have just experienced in Victoria.”

She said the need for short, sharp lockdowns – such as the measures implemented over the past fortnight in Victoria  – could not be ruled out to crush outbreaks until vaccine uptake increased.

Experts remain divided on exactly what level of vaccine uptake is needed before they would be confident that virus transmission would be minimal.

Some say the figure is somewhere around 70 to 75 per cent, while others estimate coverage must exceed 80 per cent of the adult population.

Dr Scott said even if Australia reached more than 80 per cent coverage, there would be millions of Australians unvaccinated, and others who were vaccinated but could still transmit the virus, but not fall seriously ill.

In the United Kingdom, where more than 40 million people have received at least one dose of a coronavirus vaccine, deaths involving coronavirus had dropped below 100 for the first time in nearly nine months.

But Professor Hellard said this was not reflective of the effects of the vaccine alone, as the UK had also imposed restrictions, including lockdowns, gathering limits and social distancing.

The Morning Edition newsletter is our guide to the day’s most important and interesting stories, analysis and insights. Sign up here. 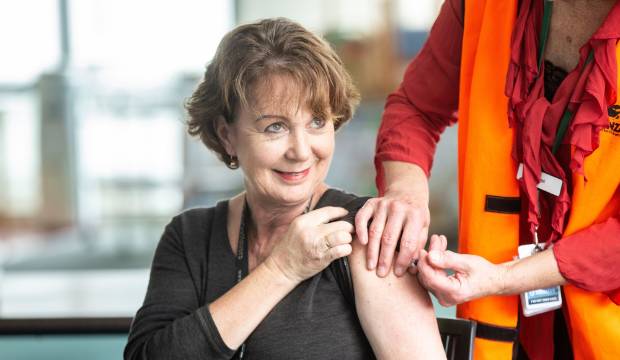 Flu vaccine uptake slightly down after spike in 2020