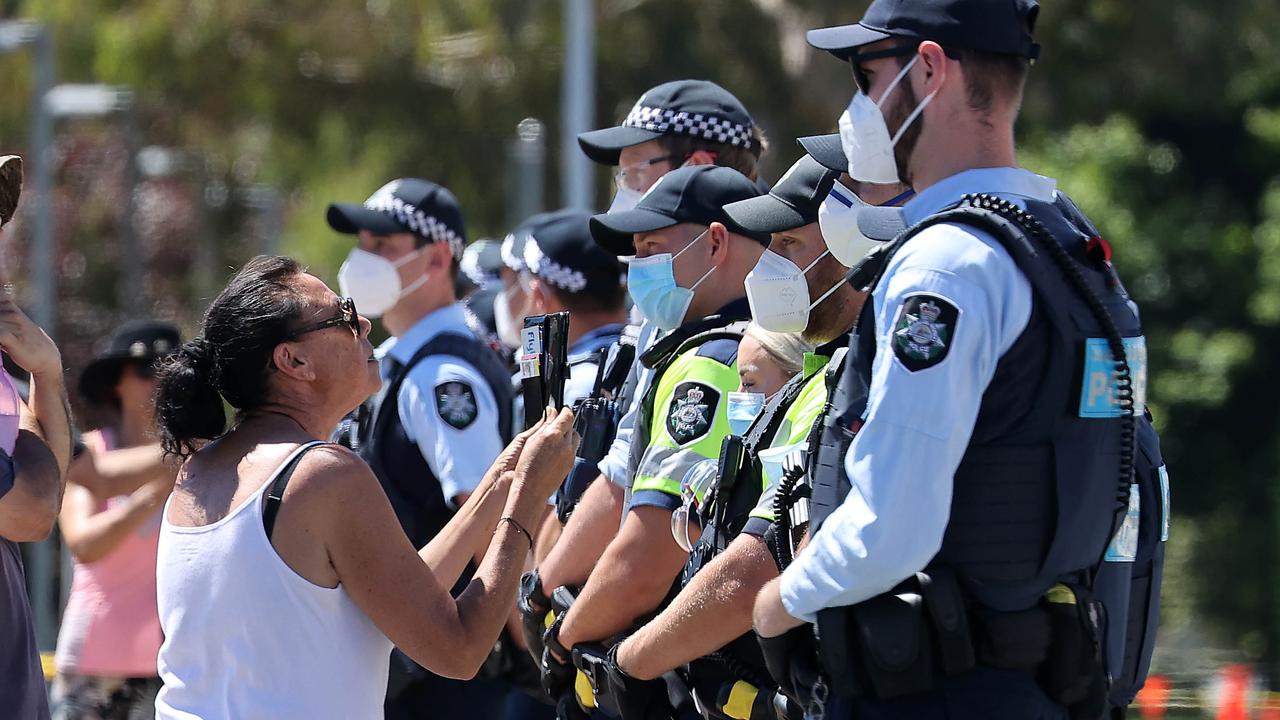 Police officers have been brought to tears and have taken to sleeping in the cars amid the national shortage of rapid antigen tests.

Police officers have been brought to tears and have taken to sleeping in their cars out of fear of bringing Covid home to their families.

The Australian Federal Police Association has raised serious concerns for its members’ mental health and wellbeing as they struggle to get their hands on rapid antigen tests (RATs), along with the rest of the Australian community.

AFPA president Alex Caruana said members in high-risk environments, such as attending anti-vaccine protests and assisting with quarantine transports, were suffering because they didn’t want to go home and risk infecting their loved ones.

“We’ve had members that are sleeping in their cars or have made makeshift humpies in their backyards … and still go to work the next day to protect the community,” he told news.com.au.

“Rapid antigen tests will significantly help with their anxiety levels and mental health.

Mr Caruana said police resources were already “stretched immensely” during the pandemic with officers doing jobs they wouldn’t normally be doing and staff in isolation, and therefore they couldn’t afford for officers to have the added stress and not be getting adequate rest.

An officer called Mr Caruana just yesterday in tears after working at a protest where other officers had tested positive to Covid. She wanted to do a test before spending time with her child but Mr Caruana explained she couldn’t get a RAT from the shops or the AFP.

While the AFPA wanted to source tests for their members, Mr Caruana said they had both financial and access issues, and were “waiting for stocks” like many other Australian industries.

The AFPA wrote to the Prime Minister and Home Affairs Minister on Tuesday requesting that the AFP be allocated 75,000 RATs to be distributed to members.

When speaking to news.com.au on Friday, the association had not heard back.

An AFP spokeswoman said RATs were distributed to areas within the AFP with highest need due to their limited availability.

Examples of when RATs were used included for testing close contacts of a positive AFP member, when there were high numbers of cases, and screening “critical business areas that need to converge in support of AFP operations”.

“The AFP is working to secure additional testing resources to support frontline members,” the spokeswoman said.

Home Affairs Minister Karen Andrews did not confirm whether the AFPA’s specific request for RATs would be met.

“I commend the AFP for prioritising frontline police officers, who regularly interact with the public, for access to RATs while further supplies come on board,” Ms Andrews said.

“The Morrison government is taking action to increase the availability of rapid antigen tests for all Australians.

“I’m confident these actions will result in increasing availability of rapid antigen tests, including for members of the AFP.”

The AFPA is not the only advocacy body to write to the Prime Minister demanding greater access to RATs this week.

The Australian Council of Social Service, a national advocacy body for disadvantaged people and community services, has urged leaders to make rapid tests free for all.

ACOSS wants the government to mail a “sufficient quantity” of RATs directly to concession card holders’ homes, as part of 42 “urgent policy recommendations”. Special Edition Open Mics with Dr. Stites: Update on Omicron and How It Impacts Seniors ‘The Five’ are fed up with Biden’s COVID failures