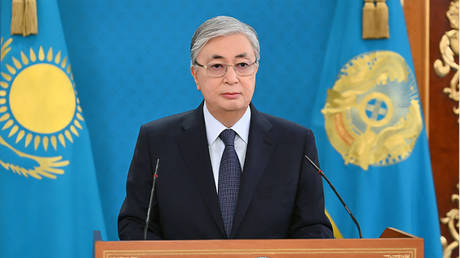 The embattled leader announced the plan in a speech to lawmakers on Tuesday, saying, “in my next address [to the people] in September, I will present a new package of political reforms that will be prepared based on a wide and constructive dialogue with the public and experts.”

Kazakhstan “will continue its course towards political modernization,” the president went on, adding, “overall, a transformation of relations between the state and the society is overdue. We need a new form of social contract.”

The proposed measures will apparently look to reform Kazakhstan’s election system, as well as property rights, government services, and systems of social support. Tokayev had previously announced plans to make changes to the nation’s defense sector, including bolstering the National Guard and intelligence services.

The announcement comes after recent mass protests in Kazakhstan, with thousands taking to the streets to protest the removal of price controls on liquified petroleum gas, as well as widespread economic inequality. The demonstrations turned violent in a number of places, and on January 5 Tokayev declared a state of emergency and asked for assistance from peacekeeping forces from the Collective Security Treaty Organization, an alliance that includes Russia.

On Tuesday, the president said that the forces had accomplished their mission and would begin exiting the country this week. Kazakhstan’s Interior Ministry reported on Monday that nearly 8,000 people had been detained during the protests, and health officials say 164 people were killed, including three children.

In addition to the newly announced reforms, Tokayev has also stated that he plans to create a new national wealth fund for social services, including healthcare and education, which he will require wealthy businesses to contribute to.