Next Memorial Day, Remember the Atomic Veterans Who Died for Their Country 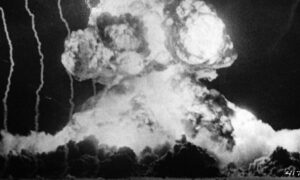 I dread Memorial Day. Don’t get me wrong. It’s not that I don’t honor our military heroes who died for their country. To the contrary, I hold them in the highest esteem. It’s just that I hate having to stifle the rage I experience every year as that important commemoration day rolls around.

Here’s the cause of my anguish. My father, Wesley L. Smith, died for his country from the health consequences of military service. But his country not only denied that he made the ultimate sacrifice, but VA administrators lied about what happened to avoid paying my mother duly owed benefits.

You see, my father was an “Atomic Veteran,” defined by the U.S. Department of Veterans Affairs, in part, as a former member of the armed forces who “participated in an above-ground nuclear test 1945–1962.” That included my dad. Here’s his story:

Dad fought in the Pacific Theater during World War II, most intensely in New Guinea. He was awarded a Silver Star and two Bronze Stars for valor in action. He was wounded by a grenade but refused a Purple Heart because he didn’t want to worry my mother. Dad was supposed to be in the first wave to invade Japan. But Hiroshima and Nagasaki spared him that ordeal.

After the war, Dad was discharged into the reserves. He had never finished high school but trained in servicing air conditioners—then, a growing industry—and opened a small business called “Smitty’s Air Conditioning Repair.” The Korean War started on my first birthday, and Dad was called back to active duty—ending the brief existence of Smitty’s.

The good news was that Dad was not sent to Korea. The bad news is that he was assigned to the Nevada atomic bomb test sites. The U.S. Army—the institution he loved, trusted, and to which he devoted his young adulthood—assigned him and fellow soldiers to witness the test explosions from a few miles away and to clean up the radioactive sites afterwards.

Why do that? Who knows? Perhaps, just to see what would happen to the men exposed to radiation. If so, my father and his fellow soldiers were treated like so many lab rats for no apparent benefit to their country.

Dad’s military career ended when an atomic bomb blast shattered his inner ear bones. He was sent to Walter Reed Hospital in Washington—a time I vaguely remember—where he was provided proper rehabilitation and fitted with a hearing aid.

He was honorably discharged in 1953 with a significant service disability benefit that allowed him to work part time as he attended college. That led to a successful career as a mechanical engineer working on missile cooling systems, including eventually, that of the Saturn V rocket that launched men to the moon.

In my father’s mid-40s, his teeth disintegrated in his mouth and he had to be fitted with dentures. His dentist asked if he had ever been exposed to radiation. Why, yes. Yes, he had.

Worried, Dad wrote a letter to the Veteran’s Administration asking about the potential health impact of his service in Nevada. He received a bit of information in return, but nothing was done to provide him with regular cancer screenings.

In 1980, Dad began to lose weight, saw blood in his stool, and suffered other symptoms known to be associated with colon cancer. Based on the very good care he received for his deafness, he trusted the VA and committed himself to its care. Not to worry, doctors told him. It was only hemorrhoids.

Wrong. His rectal cancer was finally discovered some 9 months later. By that time, it had spread to his lymph nodes and he was required to have a colostomy bag—a difficult emotional issue for Dad, who was a fastidious person.

Did the failure to diagnose the cancer earlier make a difference? Absolutely! Time is of the essence with cancer. And Dad lost at least 30 pounds between his first exam and the cancer’s ultimate diagnosis.

Dad received free care at the Los Angeles Wadsworth Medical Center—not because his cancer was service related but due to his status as a disabled veteran from the hearing loss. The doctors did their best, but he died in the Wadsworth hospice on Feb. 12, 1984, at the too young age of 65.

His body was not released to us for two days—which makes no sense—and given Dad’s history, caused us to suspect he might have been autopsied to see how the radiation affected his body.

That may be pure paranoia, of course. It could have just been a typical bureaucratic snafu (look up the military acronym slang meaning of that word!). But, given what was to come, as the old saying goes, just because you are paranoid, that doesn’t mean they are not really after you.

Dad wanted mom to apply for death benefits. She did and was refused on the basis that colon cancer was not explicitly covered by legislation then in effect to compensate atomic veterans’ beneficiaries.

Later, Congress passed legislation to specifically include colon and rectal cancer as qualifying for Atomic Veterans’ benefits. President Bill Clinton even apologized for how badly these former soldiers had been treated.

It seemed like a new day had finally dawned. Mom applied again for benefits. Despite the new law, my mother was again refused!

I tried to reverse this as a lawyer—to do justice by my dad—but the Veterans Administration lied repeatedly to deny the obvious.

First, they claimed Dad was never in the tests. When I proved that he had been in at least three tests, using the partial documentation Dad had collected—not to mention the undeniable fact that he lost his hearing in an atomic bomb blast!—a return letter arrived stating, why yes, he was there. But. (You knew there would be a “but,” didn’t you?) His radiation badge had been found and it showed no evidence of dangerous exposure. Case closed!

What a travesty. I guess Dad just had soft teeth!

But we let it go. By this time, Mom was getting old and the last thing she needed was the hell of litigation against the federal government. She died in 2016, a widow almost for as long as she was married.

Dad had hoped to spend his retirement years puttering around the house in which I was raised, traveling with Mom, selling stone jewelry he made as a hobby, and roaming his beloved California desert rock hunting. But my folk’s retirement plans were dashed by years of cancer surgeries, chemotherapy treatments, and the debilitating decline he endured. He died, a patriot to the end, of wounds received in active service as surely as if he had been shot invading Japan.

And that is why Memorial Day causes me such anguish. Despite the law, Atomic Veterans like my father have too often been cruelly denied the simple acknowledgement of their sacrifice by their country and the benefits they earned for their families.

So, I hope when the next Memorial Day arrives, you will remember those valiant heroes too, because each and every one—those who died like my father, those who beat the disease, and those who escaped from cancer unscathed—all deserve our gratitude, honor, and respect.

Wesley J. Smith is the chairman of the Discovery Institute’s Center on Human Exceptionalism.

England might score at the Euros, but don’t bet on a baby boom | Torsten Bell

In the city where Colston’s statue toppled, there are signs a culture war can be averted | Francis Welch