US war in Afghanistan, corruption and other flaws

The U.S. debacle in Afghanistan brought to light other problems that are hitting the latter: corruption and other stories about the existence of a shadow government which pulls the strings of power and enriches itself.

Billions of dollars from the public treasure pass into private hands, into the military industrial complex and unscrupulous politicians, in a filthy way.

A recent article by journalist Juan William in The Hill daily dealt with the thorny issue that is constantly present in the US media; but the answers never appear. How many former generals have gone to work for companies seeking military contracts? This is a question that, if responded, could expose corruption, whose last example was the war in Afghanistan.

How many of these generals boosted the continuation of the ‘War forever’ in that country, wrapped in the flag while enriching US defense contractors, themselves and corrupt Afghan government officials? William asked.

The problem is not new and, according to USA Today, for almost a decade Special Inspector General for Afghanistan Reconstruction in numerous reports warned that ‘fraud, squandering and abuse’ had been part of the 145 billion dollars from US tax payers allegedly spent on rebuilding the Asian nation that nonetheless is trapped in total chaos.

The newspaper mentioned evidence, including ‘the squandering of 43 million dollars in a useless gas station and 28 million in uniforms with the adequate camouflage for Afghan soldiers in a small part of the country.’

William pointed out that the new book by reporter Craig Whitlock, The Afghanistan Papers, thoroughly documents how defense and government officials lied to the public about the mission in Afghanistan to keep the war going and that their checks continued flowing, something that goes far beyond the Pentagon.

But it’s not only in Afghanistan where corruption prevails. There are countless cases. Many of them recall that then presidential candidate, Donald Trump, an expert swimmer in these troubled waters, dealt with the issue to encourage US fervor with the aim of gaining support for his bet.

However, he went down the slope that suited him best and there were people who even sought to put their hands in the government’s wallets, staying at Trump’s hotel in Washington. The former head of State even put forward the initiative that his administration paid for a summit of international leaders in his Florida resort.

Trump, William highlighted, entertained his political followers with promises of cleaning up Federal Government’s corruption, while he cynically used it to benefit himself.

According to the Pentagon, total military spending in Afghanistan, from October 2001 to September 2019, reached 778 billion dollars. Part of that money was wasted in fraud and abuses throughout the years.

The tip of the iceberg is an increase in profits for the military industrial complex during the war, in which Lockheed Martin stood out with 1 236 percent return, followed by Northrop Grumman (1 196), Boeing (975), General Dynamics (625) and Raytheon (331). 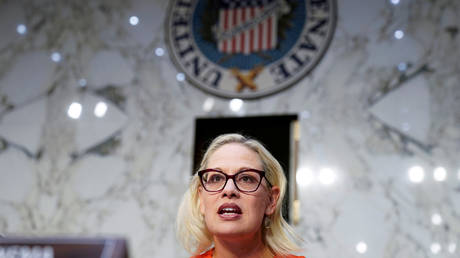 Kyrsten Sinema’s political flip-flops from ‘Prada socialist’ to proud neoliberal: Whose interests does she really defend?

Dermatology’s Academic Medical-Industrial Complex: Another Marker of a Wider Problem