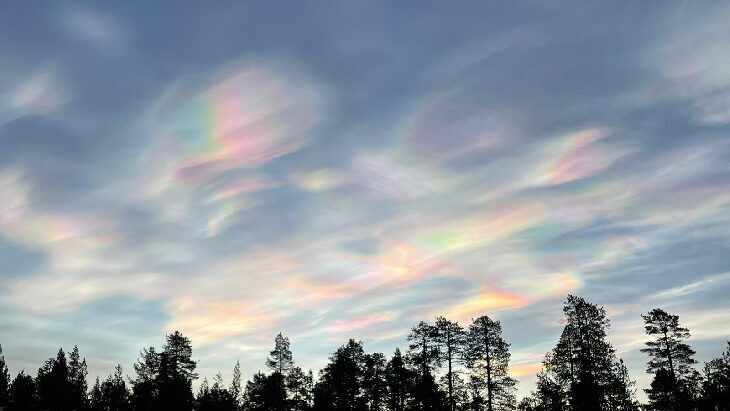 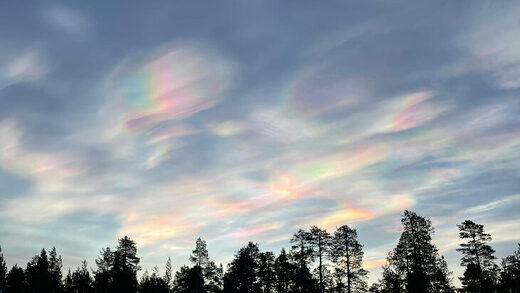 © Taken by Richard Jenkinson on January 24, 2023 @ Nellim North Finland.
These were taken by a friend using an Iphone 12. His name is Francois Guilhaume-Bohl. He took these photos this morning in Nellim Finland whilst out walking. I have submitted these photos with his permission on his behalf. This show continued for a long time this morning. I said as it was such an outstanding show he should submit these to Spaceweather, and he asked me to so.

Arctic skies are filling with color today–but it’s not the aurora borealis. A rare outbreak of polar stratospheric clouds (PSCs) is underway. Jónína Óskarsdóttir photographed the display from Fáskrúðsfjörður, Iceland: 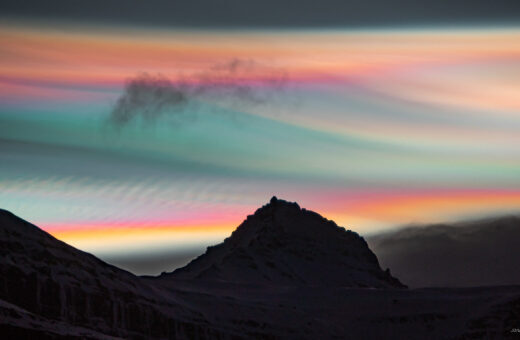 “We have been seeing these clouds for a couple of days,” reports Óskarsdóttir. “In this picture, Mt. Jökultindur is silhouetted by a sky-full of nacreous color.”

Polar stratospheric clouds are rare. Earth’s stratosphere is very dry and normally it has no clouds at all. PSCs form when the temperature in the Arctic stratosphere drops to a staggeringly-low -85 C. Then, and only then, can widely-spaced water molecules begin to coalesce into tiny ice crystals. High-altitude sunlight shining through the crystals creates intense iridescent colors often likened to auroras.

NASA models of the polar stratosphere show that temperatures have indeed dropped into the very low range required for Type II PSCs: 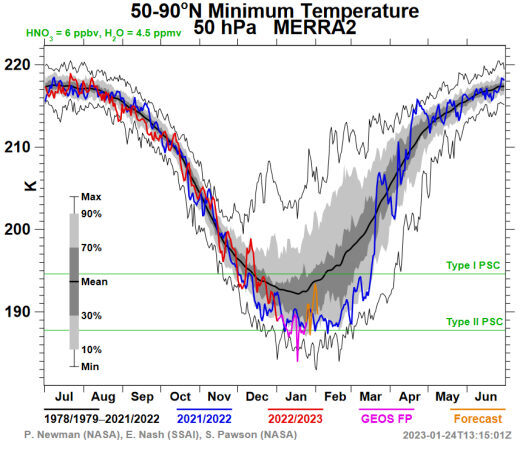 However, the forecast (yellow) calls for warming as January comes to an end, so now is the time to look. During a typical Arctic winter, PSCs appear no more than two or three times. If you see one, it’s definitely worth taking a picture.

more images: from Fredrik Broms of Kvaløya, Norway; from Jónína Óskarsdóttir of Fáskrúðsfjörður, Iceland; from Francois Guilhaume-Bohl of Nellim, Finland 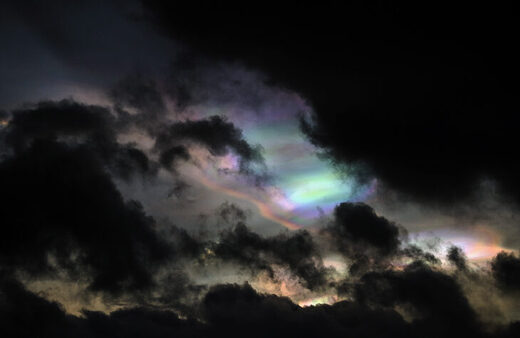 © Taken by Fredrik Broms on January 23, 2023 @ Kvaløya, Norway
Finally! I`ve been on the lookout for nacreous clouds all winter as they usually appear between mid-December to mid-January here in northern Norway. And, for some reason, always when it`s really stormy and cloudy down here on Earth. This morning, I caught a split-second glimpse of some really colourful PSCs and within an hour another gap in the storm clouds revealed a bigger display than I had thought. Some of the clouds were very colourful, including an absolutely stunning greenish cloud surrounded by purple whereas some were more milky white. Crappy weather? Maybe a gap in the clouds will surprise you today or the coming days! The PSCs were seen in the south and southeast from Kvaløya outside Tromsø in northern Norway. Nikon D4s, AF-S Nikkor 70-200 mm f/2,8. 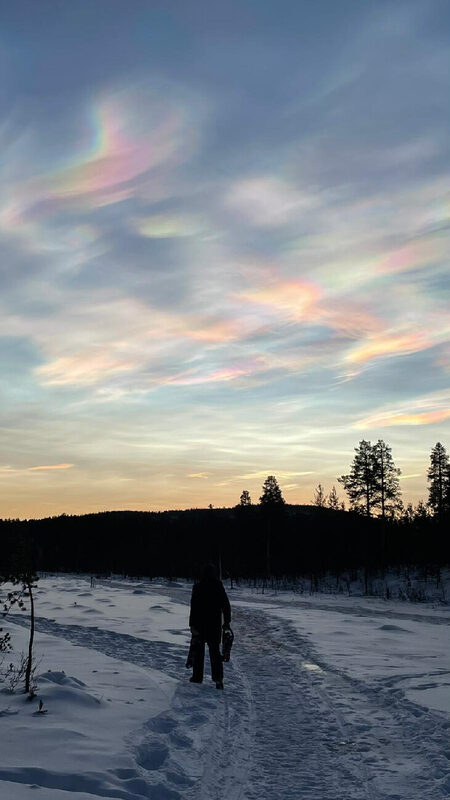 Last night, small-satellite specialist Rocket Lab launched its Electron rocket for the first time from Wallops Island, Virginia. Mike Carroll was walking along the beach in Highlands, New Jersey, when he saw it fly by: 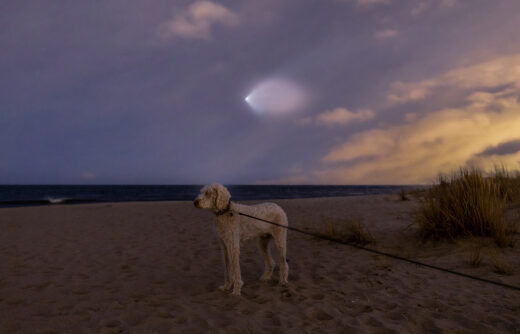 “It was great that my buddy Erik had his dog with him, and he posed for the photo,” says Carroll.

Rocket Lab is a private company launching small satellites to Earth orbit; typical payloads weigh less than 1000 lb. Founded in Auckland in 2006 by New Zealander Peter Beck, the company established a second headquarters in Huntington Beach, California, in 2013. Rocket Lab has launched many rockets from New Zealand; last night was its first from the United States.

One of the most successful space start-ups since SpaceX, Rocket Lab hopes to sharply increase its launch rate from USA. Last night’s successful launch of 3 small communication satellites from NASA’s Flight Facility on Wallops Island is a good start. 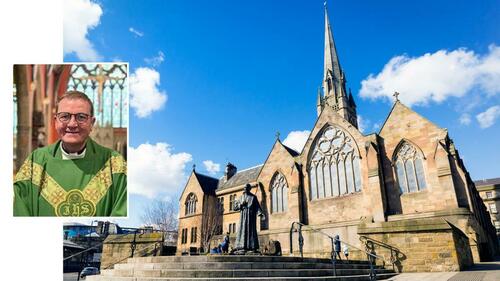 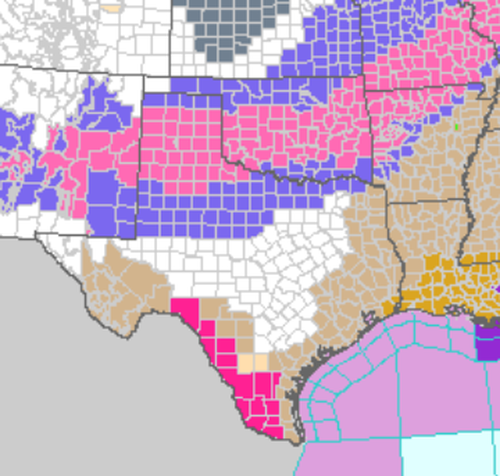 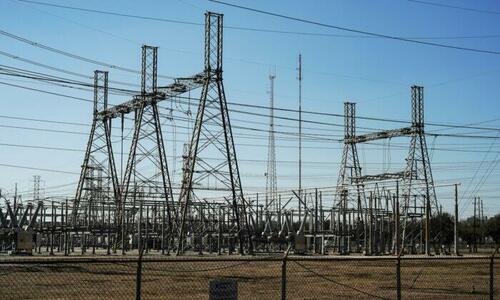